To make the holistic understanding of life more complete, these new discoveries inside the cells needed integrating with the biology of whole organisms, their environment and their ancestral history. That would make a complete natural history of life. But just after the Second World War few people were interested in making these links. Instead, scientists spoke of “the white heat of technology”, nuclear power and increasing crop yields. Physics and chemistry had won the war with Hitler, now they were at war with nature. Put another way by the politicians, the biology of agriculture and medicine was going to win the peace. Malthus was all but forgotten. 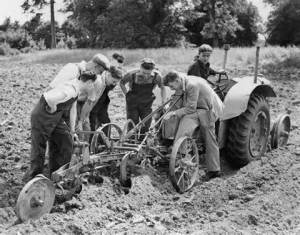 But one influential man did try to talk about the link between physical science and nature. In 1945 Aldous Huxley wrote a well-publicised but now forgotten essay that he called Science, Liberty and Peace. He presented “absurdly simple things such as ‘the Sabbath is made for man, not man for the Sabbath’, things which men of science like to forget because it is such enormous fun inquiring into the processes of nature and designing bigger and better gadgets that they do not wish to realize that human beings are sacrificed to applied science.”

Aldous had been interested in science since he was a boy but found studying difficult because of his blindness. His brother said it was just as well it happened that way or the novels would never have been written. As a silent model for CP Snow’s two cultures Aldous read Nature magazine regularly, and when he thought that he had something creative to offer, he seized the opportunity. He was usually critical of the way science was going, but now he could see a way it could be used to react to the folly of others. It could lead forward positively as well as negatively. With Julian out of the way in Paris establishing UNESCO, Aldous was beginning to enjoy the unfamiliar stage of science.

Two years after his first attack on scientists he wrote another essay called The Double Crisis. The human race was passing through a demographic and ecological crisis, he argued, with pressure on both populations and resources of which “hardly anything is heard”. The difficulties were both political and scientific and Huxley pointed out that nothing much was being done in either sphere. As though to prove that point he had some difficulty in finding a publisher for the essay, being told by one that it was “a lot of hot air”. The theme centred on the old Malthusian issue of the human population being too large for the planet to sustain. It was continuing to rise at an alarming rate with no government encouragement to reduce it or the excessive exploitation of the earth’s resources.

The second topic was the part of Huxley’s essay that was new and had most impact, the argument that prosperity exploited the planet’s limited resources. What was usually called “progress” was having the opposite impact on both the organic and inorganic resources of the natural world: all living organisms and their environment. People in the modern world were living under the illusion that they were in charge of their lives. In his essay, Aldous Huxley explained that we cannot conquer nature, the first time that many people had realized this. It was a shock that most people were not going to register seriously: “Sooner or later mankind will be forced by the pressure of circumstances to take concerted action against its own destructive and suicidal tendencies. The longer such action is postponed, the worse it will be for all concerned…. Over-population and erosion constitute a Martian invasion of the planet ….  Treat nature aggressively, with greed and violence and incomprehension: wounded nature will turn and destroy you.”

Julian Huxley drew on the new scientific establishment when he became the first Director of UNESCO, reassuring us consumers that a new phase of quietness was to begin.

No-one listened to the few warnings about abusing nature. They were dismissed as idle predictions for the future and everyone was busy building for the present. The Huxley brothers had lived through one of the catastrophic events that divided two quiet ages and they were among the few people then who realized they were at a time of transition. Aldous drew on Shakespeare’s The Tempest to distinguish religion and magic, understanding the place of human self in nature and how the whole must change itself through different scales of time. 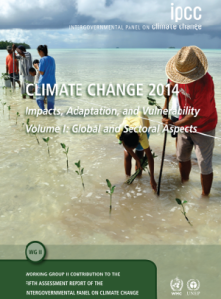 Our revels are now ended, these our actors,

As I foretold you, were all spirit, and

Are melted into air.