Because it had a university and was close to London, Oxfordshire was a place where field studies of living and fossil species were opening up the vast scale of life’s diversity in both space and time. And another of the newly recognized scientists looking at pre-historic life was Hooke’s friend Robert Plot (1641-1696). 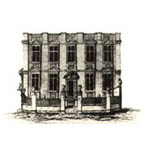 He was important as much for what he was not, being free of the ties to the professions of church, law and medicine. He was aware that he crossed an important time boundary, having been brought-up to know about life in the comforting traditions of Genesis, but being influenced more and more by the challenging discoveries and discussions around Oxford.  As a university-fellow, not an ordained member of the church, his open and free interest in natural things helped him become the first keeper of the Ashmolean Museum and the first Professor of Chemistry. Most famously he wrote the Natural History of Oxfordshire in 1677, which recorded specimens of archaeology, minerals, what he called “echoes through the ether” and alchemy. He even understood that stalactites and stalagmites formed in caves by the evaporation of water from the dilute solution of calcium carbonate expected in spring water, and that this also explained how organic structures became petrified. It was just one of the ways in which things fossilized: “tis possible, that Shells found on the Tops of Mountains, may be brought thither by the Fall of Spouts. And that real shells found deep in the Earth, may be brought thither by the vast Subterraneous Indraughts coming from the Sea, which occasion Springs.”

Among some of these fossils brought to him from a quarry in the western part of the county was a very large and heavy femur, with unfamiliar features. Perhaps the process of petrifaction had increased its size and weight? Perhaps it was from an elephant brought to Oxfordshire by the Romans during their occupation of Britain? But other petrifactions didn’t show signs of expansion and there were no other elephant fossils in the same region. Maybe it was from a very large horse, but the fossil’s structure was different.

Even Plot turned away from his modern lateral-thinking that seemed to be a very hard journey with no clear end, and so he went back to Genesis chapter 6 verse 4: There were giants in the earth in those days; and also after that, when the sons of God came in unto the daughters of men, and they bare children to them, the same became mighty men which were of old, men of renown. He had forgotten about Goliath who had been “nine Foot, nine Inches” tall, not an uncommon height for giants from literature of the ancients. He even entertained the possibility that the femur was from a woman: “The tallest that I have seen in our Days was a woman of Dutch Extraction, shewn publickly here at Oxford, seven foot and a half high, with all her Limbs proportionable.”  The giant femur was later compared to similar specimens from near the same quarry and named by the Victorian vertebrate palaeontologist William Buckland as Megalosaurus (which we know now to be a Late Jurassic dinosaur). 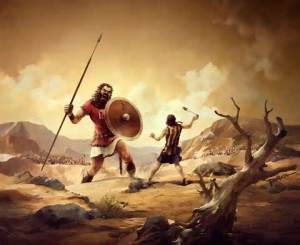 Plot’s specimen has been lost but there is still the correspondence he had with another old Oxford friend, Martin Lister (1639-1712), a fossil enthusiast who didn’t care much for Steno’s idea of their organic origin. In one of his many letters to Plot that was eventually published in the Philosophical Transactions of the Royal Society, Lister suggested they formed independently in the rock, by a process he called “plastick virtue”, a kind of natural force he thought mimicked shapes familiar in real animals and plants.

Remember that these early scientists were also committed Christians, as was expected of all academics at Oxford. They had no doubts about their faith in God and were genuinely and excitedly trying to find an explanation for how the creatures that God created could or could not come to end up appearing to be carved in rock half way up a mountain. Plot’s other friend, Hooke, explained it quite differently from Lister but more realistically, saying that they had been “brought to the places whether they are now found by a Deluge, Earth-quake, or some such means, and there being filled with Mud, Clay and petrifying Juices, have in tract of time been turned into Stones, as we now find them”.

One source of this discontent was a group of Cambridge dissenters, since named the Neoplatonists, to whom religion and rationality were part of the same living system. Not for them the reductionism of the philosopher Thomas Hobbes or the Puritanical dogma of the new divine groups. One of the major neoplatonists who summed up the intellectual mood of the pioneer life scientists at the end of the seventeenth century was Thomas Burnet (1635-1715). He came from the north-east of England, had an early interest in the landscape of that part of the world, and went to Cambridge in 1651 where he was ordained to become a Fellow at Christ’s College in 1657.

From his very broad background in 1684 Burnet tried to unite science and scripture with his Sacred Theory of the Earth. This was an earthly history with scientifically credible explanations of biblical events. It involved, but did not explain, all the processes and happenings, seas, mountains and the broken remains of the catastrophic Flood with its volcanoes, earthquakes and severe storms. His idea received a lot of support from scientists, especially Newton, well aware that it meant there could have been no life before the flood, no seas or mountains. Instead, Burnet expected the flood to have been an overflow from a great deep inside the earth, somehow connected to inland springs and the sea to explain the upland fossils. That was the same idea that Robert Plot had described a few years before. The final stages of his history were completely new, predictions with no evidence, and although they were based on familiar processes, they were not taken seriously by the few scientists able to understand them. The main point that Burnet wanted to make was that the earth was not eternal. For good measure, he did not even mention the Incarnation.

Newton and many other scientists were worried about the way Burnet explained the Flood as the beginning of life’s diversity and his origin of mountains and seas. How could that explain fossils being at the top of mountains, if they really were from animals that once lived in the sea, as most of the scientists believed? They could have been living there before the catastrophe of the Flood. Burnet’s option also left open the question of what caused the Flood, God’s providence or some other cause, something blasphemous.

The timing that Burnet chose to present the last three events of his earth theory, those predicting a heavenly future, was impeccable. It was in 1688, the year of the Glorious Revolution, the overthrow of King James II by a group of parliamentarians and William of Orange from Holland. 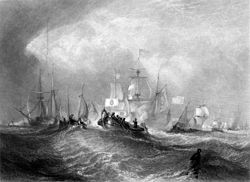 The resulting Bill of Rights took power from the English monarch and ensured that Roman Catholicism would not be re-established. Burnet’s stand for the rule of scientific evidence was a turning point in the history of how we understood living processes, for it showed the diversity of living things in a new way. As well as the two-dimensional array of species spread out on the land and in the sea, for the first time there was the third direction back in time to look at the earth and its life before the Flood.

This made the forward-looking Burnet very popular with the new authorities and he was given the important job as Master at Charter House School, in Smithfield.

At the same time he served as cabinet chaplain to William III who reigned from 1689-1705. With this new power Burnet refined his thoughts about the days of Creation, suggesting they were phases of construction, changes in matter and motion. This must have been seen as some kind of official interpretation of life’s meaning, going into surprising detail on things such as the days before the Flood, when the earth was smooth and had constant climate with a perpetual Spring-time. The story-telling entered the world of fantasy with more official policy supposedly from Descartes, that the Flood led to fracture and collapse of this constant state, leading to a ‘ruin’, a ‘broke globe’. It was all very good for those who preferred “facts” to theology, but these were wild ideas rather than “facts” and certainly Burnet’s offering was not science.

Still under questions from the protestant church, in 1692 Burnet defended his position with a clearly thought-out statement of his open expectations to: “be vigilant for truth, and maintain proportion, that we may distinguish certain from uncertain, day from night.” Nevertheless, later that year he was forced to resign as William III’s cabinet chaplain because of his controversial account of earth history. This was the second senior resignation on the issue in thirty years, John Ray leaving Trinity College in 1662 for his refusal to conform by signing the Act of Uniformity.

For the next hundred years rhyme and reason held together across Europe and science made slow but steady progress in a few obscure corners. In England, civil war and the Glorious Revolution had stimulated interest in science and there was rapid progress in chemistry and physics. In Italy the 1631 eruption of Vesuvius had had the same effect, but for the first part of the eighteenth century things had quietened down. For several decades Europe was calm, a period of contemplation and quietly testing the new ways of understanding life. Many scientists were pleased to be working with Bacon’s methods, still looking for a utopian end for life but making a place for reason as well as religion. Bacon, Steno and Ray had opened these ways to new outlooks on the origin and history of living things, allowing people like Burnet to move away from the rigid interpretation of Genesis. It was a courageous break and opened up a torrent of alternative ways to explain these fundamental issues that better fitted the other changes occurring in European society.