Most of the public interest in the Origin had centred on what it said about the human species, especially the argument that Homo sapiens shared ancestors with all the other Primates. This was despite the author’s decision to avoid details of that topic in the book, knowing how difficult and controversial it was. Religious people were not the only ones who wanted to keep humans at the top of the tree of life, for nearly all Europeans took that place for granted, even expecting it to put them above other races. Darwin’s own values had been challenged in 1832 by his reaction to the Tierra del Fuego communities and with no clear evidence he was content to leave any debates about that matter until later.

Instead, he put the basic things first and used the Origin to concentrate on the scheme of natural selection. What was more, its immediate positive reception showed that English society was ready for a mature assessment of the human place in evolution and who better to write it than Darwin himself. He was persuaded to write it by his publisher John Murray and they argued about the title before settling on The Descent of Man. That title, by the way, should surely have received a prize for the cleverest example of defence being the best form of attack. For Darwin, man was not necessarily at the point of highest ascent on the evolutionary mountain. The important thing was how species came to be alive in nature, not to make some judgment about values and morality.

Wallace’s skepticism about humans as just another species of primate grew. He seriously doubted that natural selection explained why the human brain was so big and assumed that intellectual capacity accounted for this larger size. Was this sufficient to increase the chance of human success or was there some other explanation, such as the selective force from a higher spiritual power? He wrote about these ideas in an 1869 book review of Lyell’s updated version of the Principles of Geology and Darwin, who was still writing The Descent of Man, replied angrily: “I groan over Man – you write like a metamorphosed (in retrograde direction) naturalist, and you the author of the best paper that ever appeared in the Anthropological Review! Eheu! Eheu! Eheu!” Instead, Darwin suggested that language accounted for the larger human brain, that it “depends on the external inheritances of civilization, rather than on the organic inheritances of the civilized man.”

The social class of scientists was becoming less elitist, it was the beginning of the end of the grand tradition of wealthy Oxbridge clerics studying natural history as amateur gentlemen. It was becoming more unusual for men of independent means like Darwin and Galton to excel in science, though plenty of parish priests and other professionals spent a lot of time with their passionate English culture of natural history. Most of the biologists from the professional classes, men like Huxley and Hooker, needed to earn money, and gradually, men from working class backgrounds, Wallace and Bates for example, were being accepted into the company of the intellectual aristocrats. This did not happen in the early nineteenth century as William Smith and even Gideon Mantell testified.

But when the socially elite were in decline so the specialist elite were rising. They knew something about the world that others did not. They cultivated masks of jargon to hide their skills and ignorance from other people and they had answers to awkward questions. These abilities gave the scientific specialists a kind of power, sometimes clouded by arrogance, which had a special place in the old societies of the European countries. But in the new world of North America they were treated like anyone else.

So began the biological contributions to the dialectic form of mid-nineteenth century intellectual debate, the inevitable consequence of the perpetual motion of self-conscious reason found in any large society. They were ideas first put into historical context by the philosopher Georg Hegel’s Berlin lectures back in 1823, and later used by Engels to find a goal in history. Engels and Marx were later to apply this same philosophy to communist politics, but at first Engels was more concerned with its relevance to nature and its large systems of apparent chaos.

In the final decades of the nineteenth century the life sciences were struggling to resolve four important issues. One was the difference between De Condolle and Galton, the argument they stimulated about nature and nurture. Galton also stimulated the debate about whether evolution was gradual or sudden and the changing view about the age of the earth. A third big debate was beginning, in ignorance of Mendel’s premature answer, about whether inheritance was transmitted by vibrations, particles or something else. Fourthly, there was the debate about whether humans were just another species, this involving Galton and his adversary Wallace.

In England. Galton’s 1869 Hereditary Genius was one of a series of books published then about human evolution as part of the debate stimulated by the Origin. Talk of human evolution, whether by natural selection or something else, was all the rage in the 1860s and there was a flurry of books on the subject. It was not unlike the publishing storm over geotheories a hundred years before when a different set of extrovert thinkers wanted to turn the very different topical issues to their own advantage. Over that century, science had been slowly getting a grip on the same big question; it had shifted from being about the origin of the earth to the origin of humans. Lyell’s book on The Antiquity of Man was the first out, in February 1863, quickly followed by Huxley’s Man’s Place in Nature. Wallace wrote a substantial article on the Origin of Human Races the following year and then Darwin’s Descent of Man and Selection in Relation to Sex in 1871. Few people had any doubts about the validity of biological evolution by natural selection, this was not the main issue when man came into the sequence of evolutionary progression. The central issue then was whether humans were like other animals. Huxley and Darwin both argued that humans and other primates were obviously and clearly related; they had no doubts that all were from the same branch.

Through the 1870s and up to the 90s the growing interest in human evolution became inextricably mixed up with the nature and nurture debate which was where Galton’s heavy emphasis on the distribution of human intelligence was leading.

Lyell and Wallace were holding out for man as a special case. Wanting to do a favour to a friend short of money, in 1872 Lyell commissioned Wallace to correct his manuscript for a new edition of the Antiquity of Man. He was pleased to have a like-minded editor check the argument and also hoped it would be seen as a good way of showing his appreciation for the 1869 review of the new edition of Principles that had so disappointed Darwin. The gesture could also be seen as the mastery of Lyell and his close friends over Wallace, the social outsider, who was not going to threaten their world after all.

Darwin’s book took a lot of space to address Wallace’s vexed issues of the large human brain and it speculated on what might have filled the brain to make it so much larger. There were no easy answers because supposedly human faculties such as moral reasoning, sympathy for others, appreciation of beauty and music could be found in smaller degree in some other mammals such as dogs and apes. Darwin had referred to psychology at the end of the Origin and he talked later to Wallace about how the sexual displays by his birds of paradise might have their equivalent in human selection. “Among savages the most powerful men will have the pick of the women, and they will generally leave the most descendants.” Wallace was not too sure since “every race has its own style of beauty” and we cannot put our human values on other species. Then, of course, there was the question of whether different human “races” were distinct “species”. Although everyone agreed that both these concepts were very difficult, some agreement was emerging that all living humans were the same species. 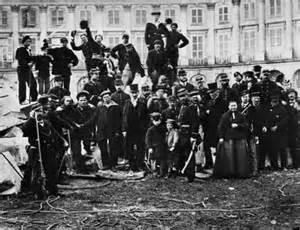 The Descent of Man was published in May 1871 just as groups of extremists took over L’Hotel de Ville in Paris and set up the Paris Commune. In London The Times condemned these Communards and made an interesting link to the new book: from a man who incurred “a grave responsibility when, with the authority of a well-earned reputation, he advances at such a time the disintegrating speculations of this book.” But there was to be even more criticism of this kind, derived from other experiences that Darwin and Wallace had had in South America, influenced by the culture of the enlightenment in which they had been brought up and was then dying away. This was their attitude to slavery, which some inevitably linked to how they saw the boundaries of our own species.

Not only was The Times horrified at the lack of defense in the capital but Haeckel’s professor at Munich, the anthropologist Rudolf Virchow rebuked him: “We cannot teach, we cannot maintain as a discovery of science that man has descended from apes or any other animals.” Haeckel was very upset by this onslaught, and Huxley wrote to encourage his spirits: “May your shadow never be less, and may all your enemies, unbelieving dogs who resist the Prophet of Evolution, be defiled by the sitting of jackasses upon their grandmothers’ graves!”